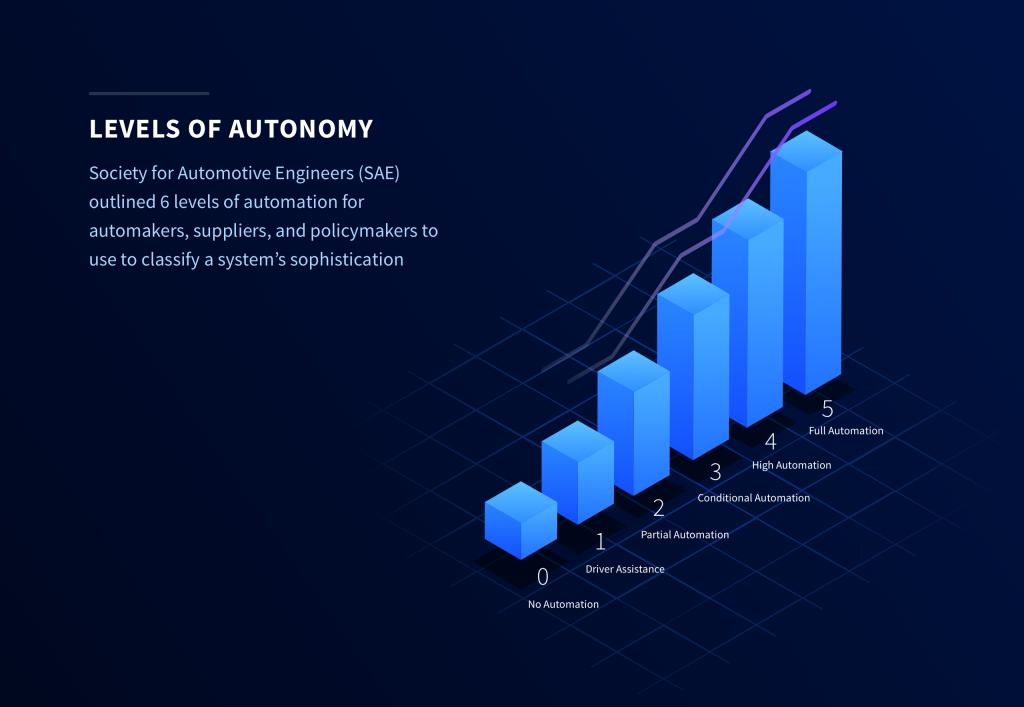 To bring clarity to such situations, the Society for Automotive Engineers (SAE) outlined 6 levels of automation for automakers, suppliers, and policymakers to use to classify a system’s sophistication via their standard titled  J3016.

This is where the human driver controls the car completely without any support from a driver assistance system.

SAE’s Level 1 is an automated system on the vehicle that can sometimes assist the human driver to conduct some parts of the driving task. In fact, many top-of-the-range car models offer level one automation. You’re still the driver with full-control on driving however, you may call upon technology like adaptive cruise control for active safety. At Level 1, a computer can control either steering or acceleration/braking, but it is not programmed to do both at the same time. To sum it up, you still have full responsibility to monitor road situations and assume all driving functions if the assistance system cannot do so for any reason.

Functions that make partial automation possible are already a reality and in practice. Semi-autonomous driving assistance systems, such as the Steering and Lane Control Assistant including Traffic Jam Assistant, make daily driving much easier. They can brake automatically, accelerate and, unlike level 1, take over steering.With the remote-controlled parking function, it's possible to pull into tight spots without a driver for the first time. In level 2, the driver continues to remain in control of the car and must always pay attention to traffic.Here’s the list of some driving assistance systems,

In the third development stage, drivers gain more freedom to completely turn their attention away from the road under certain conditions. In other words, they will be able to hand over complete control to the car. The driver, however, must be able to take over control within a few seconds, such as at road construction sites.

Level 4 is considered to be fully autonomous driving, although a human driver can still request control, and the car still has a cockpit. In level 4, the car can handle the majority of driving situations independently. The technology in level 4 is developed to the point that a car can handle highly complex urban driving situations, such as the sudden appearance of construction sites, without any driver intervention.The driver, however, must remain fit to drive and capable of taking over control if needed, yet the driver would be able to sleep temporarily. If the driver ignores a warning alarm, the car has the authority to move into safe conditions, for example by pulling over. While level 4 still requires the presence of a driver, cars won’t need drivers at all in the next, final level of autonomous driving. However, their operations will be constrained to certain situations,

Unlike levels 3 and 4, the “Full Automation” of level 5 is where true autonomous driving becomes a reality. Here drivers don’t really even need to have a license. and everyone in the car is a passenger. Cars at this level will clearly need to meet stringent safety demands, and will only drive at relatively low speeds within populated areas. They are also able to drive on highways but initially, they will only be used in defined areas of city centres.